Scotland’s capital is one of the most beautiful cities in the UK, with an abundance of architectural riches from the higgledy-piggledy streets of the medieval Old Town to the Georgian order of New Town. 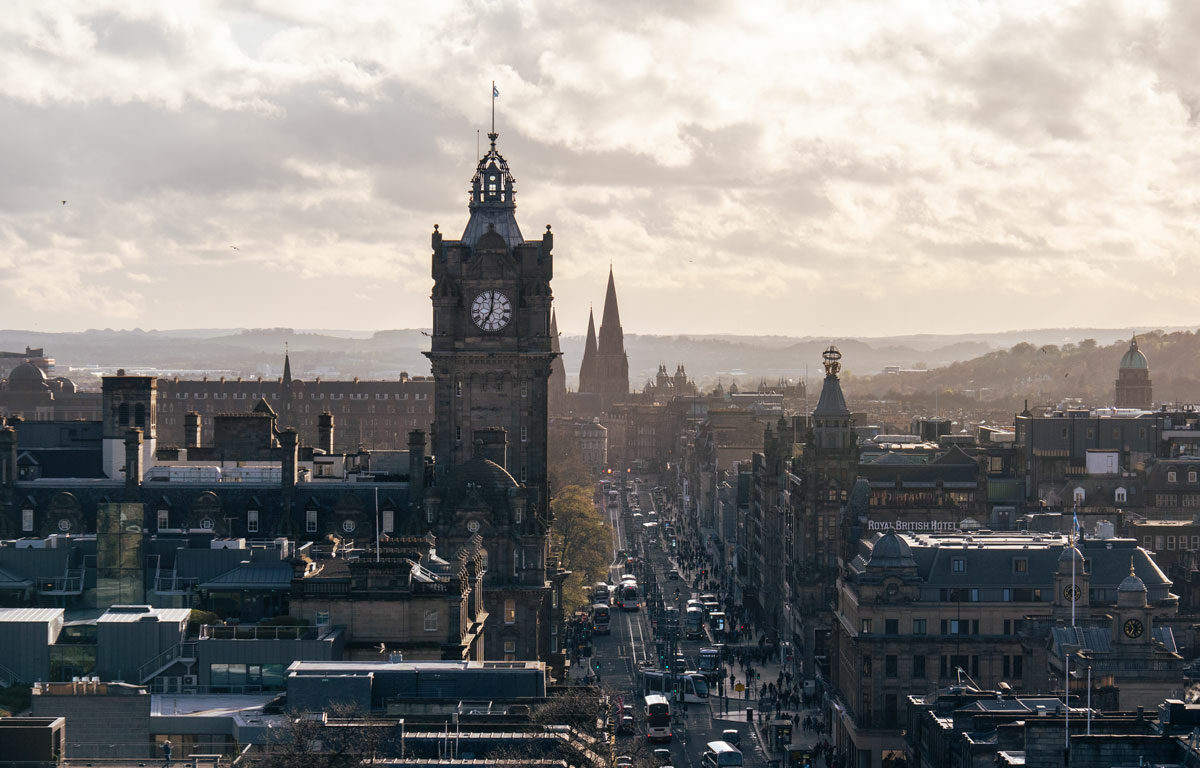 This is the first, in what we hope will be a monthly series of posts about places of interest in the UK. We wish to provide you with a flavour of the places we visit, through history and modern and cultural references and inspire you when planning your future travels. We begin the series with a visit to Edinburgh, a city that I called home for a few years, and which I still love to visit when I can.

Scotland’s capital is one of the most beautiful cities in the UK, with an abundance of architectural riches from the higgledy-piggledy streets of the medieval Old Town to the Georgian order of New Town. The quality of the architecture and the contrast in styles between the old and new towns were cited as reasons for awarding UNESCO World Heritage Site status in 1995. The city also features ultra-modern architecture such as the parliament building designed by the late Enric Miralles. In the town centre, dominating the skyline sits Edinburgh Castle built upon Castle Rock, an extinct volcanic plug formed 350 million years ago.

The Old Town retains much of the original medieval street plan of the city and features many buildings dating back to the 16th century. The Old Town’s main thoroughfare is the Royal Mile, although it only gained this name in the 20th century. This street runs downhill from the castle to Holyrood Palace, with narrow alleyway called closes originally running steeply downhill from either side. With its terrace running high above the road, Victoria Street is a particularly photogenic spot, with plenty of restaurants, cafes, and shops. This road leads down to the Grassmarket, the Cowgate and Candlemakers Row, names that conjure up images of Edinburgh’s distant past. The Cowgate is one of six gates or ports through the old Flodden Wall, most of which is long since gone. It was constructed in the 16th century to keep the English out following the Scottish army’s defeat to the English at Flodden in 1513. 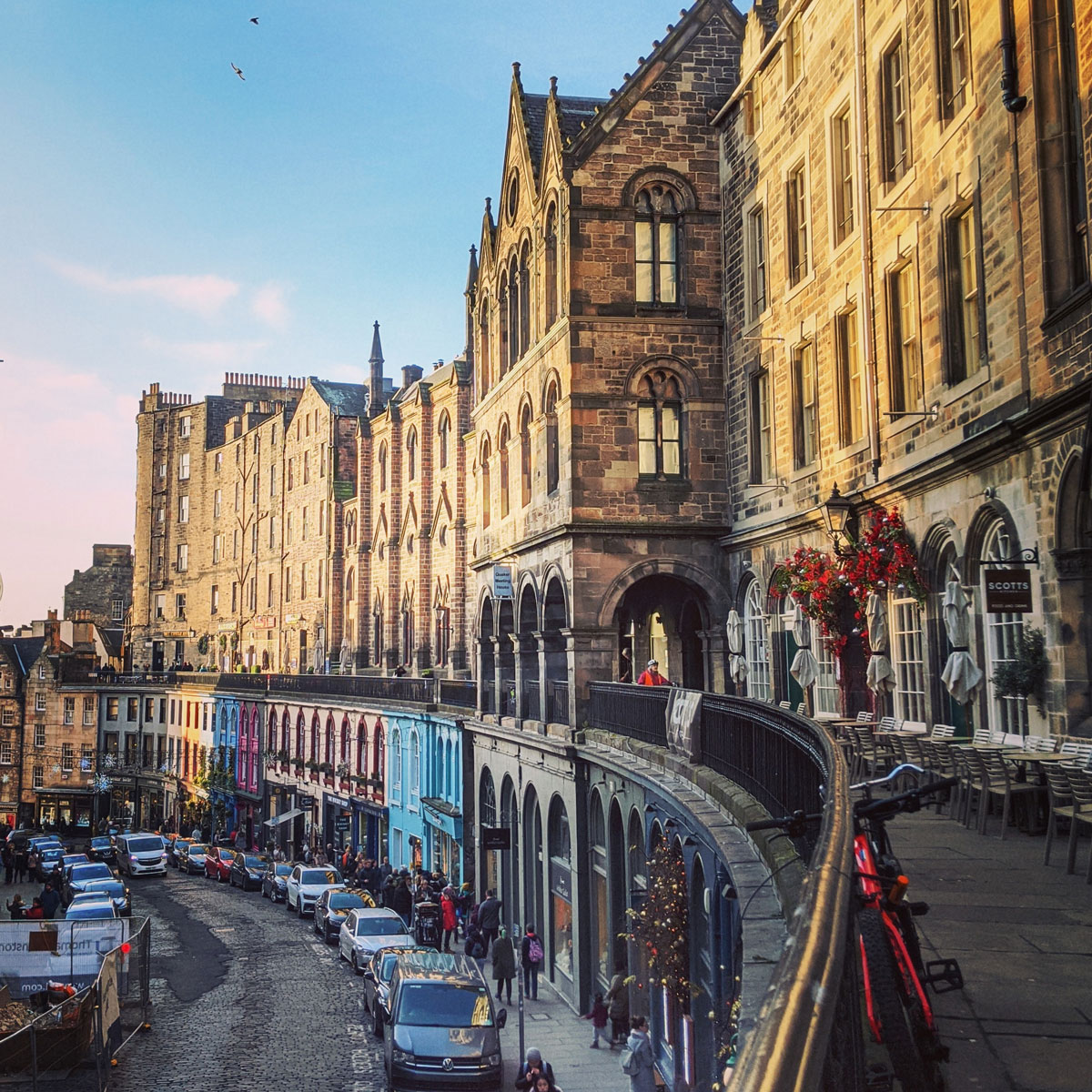 As the city’s population grew in the 17th century, overcrowding began to reach breaking point. A New Town was proposed by the City Fathers to the north of the castle, and a design competition was held in January 1766 to find a suitably modern layout. The competition was won by 26-year-old James Craig who proposed a grid layout either side of a main road linking two squares. The principal road is George Street with Princes Street to the south and Queens Street to the north. Saint Andrew Square and Charlotte Square mark each end of the grid. Construction began on the New Town in 1767, and further neighbourhoods were developed up until around 1850. The 1.5 million cartloads of excavated material from the New Town’s construction were tipped to the south of Princes Street and formed the hill now called The Mound.

Edinburgh gained its nickname the Athens of the North, partly due to the Grecian influence shown in the new Georgian architecture, as well as the fact that Edinburgh was becoming known as a centre for learning and culture.

The seven hills of Edinburgh

Edinburgh is built upon seven volcanic hills, which offer spectacular views of the city both from the outside looking in and the inside looking out.

Directly at the eastern end of Princes Street and firmly in the city centre sits Calton Hill. This hill provides a panorama of the New Town and views along the Forth Estuary to the three Forth Bridges. Calton Hill also features the unfinished National Monument of Scotland, a memorial to the Scots who died fighting in the Napoleonic Wars, The Nelson Monument and the City Observatory.

The largest of Edinburgh’s hills is Arthur’s Seat which rises above the city to a height of 251 metres. Some believe that Arthur’s Seat could be the location of Camelot, King Arthur’s legendary castle, hence its name. Others believe the name is derived from a corruption of the Scottish Gaelic Àrd-na-Said meaning “height of arrows” or Àrd-thir Suidhe meaning “place on high ground”. However, it came by its name, a walk up Arthur’s Seat is a great way to spend a few hours. 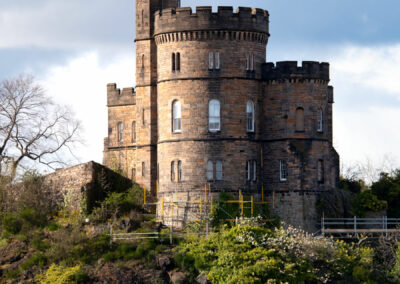 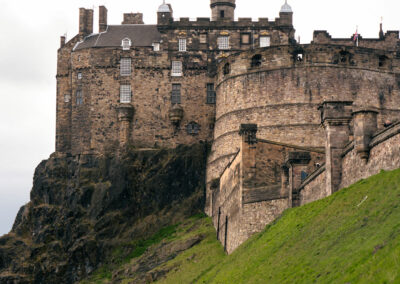 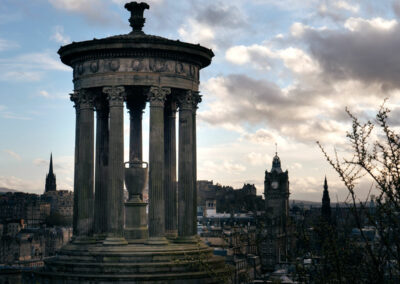 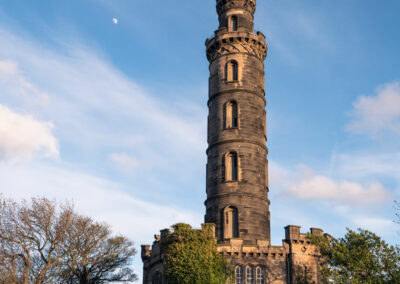 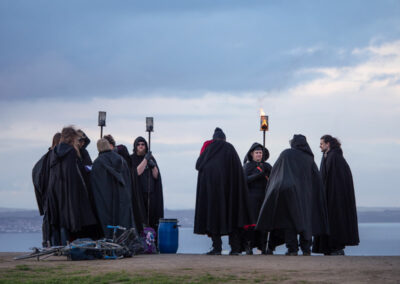 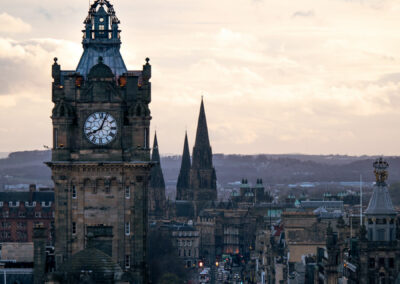 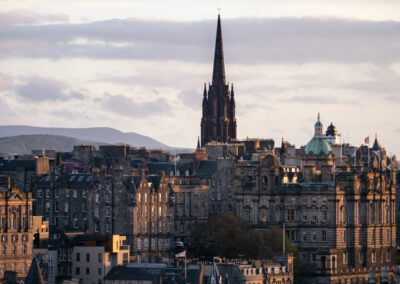 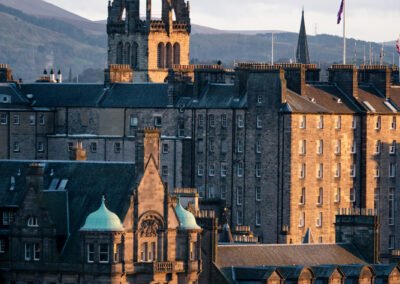 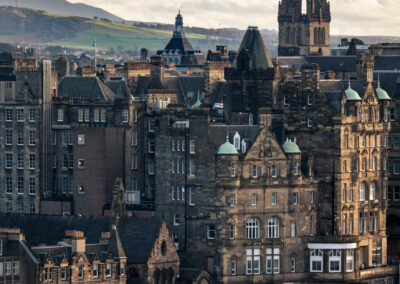 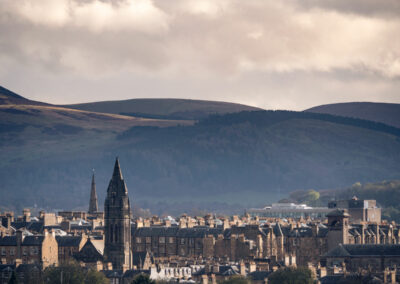 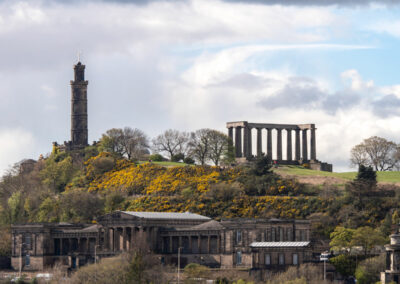 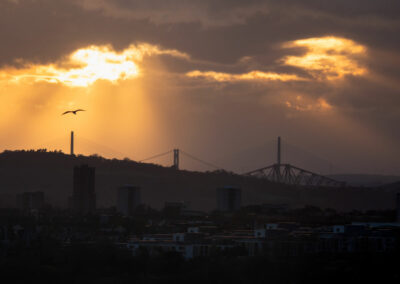 A less romantic nickname for Edinburgh is Auld Reekie, meaning old smoky. The city had a population of 50,000 and the smoke from open fires of the tenements hung in the still air within the city’s 17th-century city walls. The stench of smoke was compounded by the fact that the city had no sewage system. Chamber pots were emptied from the windows of tenement buildings accompanied by the cry of “Gardyloo”, a phrase borrowed from the French “Prenez garde a l’eau!”, beware of the water! Much of this effluent ran down to the north of the city and into the rancid Nor’ Loch. The Nor’ Loch has since been drained and is now the beautiful Princes Street Gardens.

More recently the aroma of malted hops and yeast could be experienced in Edinburgh. Brewing beer in the city originated with the monks of Holyrood Abbey taking advantage of the natural springs in the area. Brewing became a prominent industry – and at its peak, in the late eighteenth and early twentieth century, the city was home to 38 breweries. All of these except for the Caledonian Brewery, have now closed. Several micro-breweries have recently opened, keeping the tradition of beer brewing alive in the city such as Pilot, Bellfield Brewery and Barney’s Beer.

Edinburgh in film and literature

Many famous authors were born in Edinburgh including Robert Louis Stevenson, Sir Arthur Conan Doyle and Iain Banks. But the Edinburgh authors Muriel Spark, Irvine Welsh and Ian Rankin have set their novels in the city.

Muriel Spark’s most famous work, The Prime of Miss Jean Brodie, tells the story of a young teacher who ignores the curriculum and influences her impressionable pupils with her romanticised world view. The novel was made into a film in 1969 starring Maggie Smith and was mostly filmed in the Edinburgh Academy and the surrounding area.

Ian Rankin’s Inspector Rebus is a smoking, drinking, hard-man, the result of an upbringing in the council estates of Scotland during the post-war industrial decline. After leaving the SAS, Rebus joins the Lothian and Borders police to solve brutal murders, suspicious deaths and disappearances in 24 novels.

The most well-read works of modern fiction to come out of Edinburgh are the Harry Potter books. The author JK Rowling created the wizardly world of Hogwarts, mostly in Nicolson’s Café and the Elephant House after moving to Edinburgh.

Probably the most well-known modern cultural reference to Edinburgh is Danny Boyle’s film Trainspotting, adapted from the Irvine Welsh novel. But only the opening scene, where Renton is chased down Princes Street before being hit by a car under the Calton Street Bridge, is filmed in Edinburgh. The remainder of this gritty, disturbing but witty film is shot in London and Glasgow.

The sequel T2 Trainspotting features far more of Edinburgh including the Old Town and Arthur’s Seat.

Another film shot extensively in Edinburgh is Dexter Fletcher’s Sunshine on Leith, with music by the much loved adopted sons of Edinburgh, The Proclaimers. This musical romantic comedy tells the story of two soldiers returning home from Afghanistan and their lives and loves in Edinburgh. Fletcher has described Sunshine on Leith as “a love song to Edinburgh; a family story, full of art and hope.”

Other than The Proclaimers, Edinburgh is unable to boast of any mainstream bands or artists since the tartan teen sensation the Bay City Rollers in the 70s. There is a modest independent music scene with Mercury Prize-winning Young Fathers and ambient electronic duo Boards of Canada.

With its relaxed licencing laws and large student population, Edinburgh has a lively nightlife. With twelve pubs in a little over a kilometre, Rose Street is always buoyant and The Pear Tree in Southside with its large beer garden is busy throughout the day and night. Many pubs are open until 1 am or later, and there are many clubs, where until Covid you could have danced and drunk until 5 am.

I hope you enjoyed my exploration of Edinburgh. Next month, we will look at the maritime city of Bristol, a city I am less well acquainted with, so time for me to go and do some research.

All photos were taken by Neil Goulding.